231. Ah, September, when Europe unleashes a summer's worth of crazy

Our interview this week (in our new studio!) is with Hon. Michael Chertoff, my former boss at Homeland Security and newly minted author of Exploding Data: Reclaiming Our Cyber Security in the Digital Age. The conversation – and the book – is wide ranging and shows how much his views on privacy, data, and government have evolved in the decade since he left government. 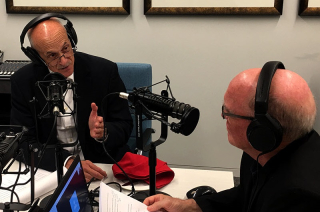 He’s a little friendlier to European notions of data protection, a little more cautious about government authority to access data, and even a bit more open to the idea of letting the victims of cyberattacks leave their networks to find their attackers (under government supervision, that is). It’s a thoughtful, practical meditation on where the digital revolution is taking us and how we should try to steer it.

The News Roundup features Paul Rosenzweig, Matthew Heiman, and Gus Hurwitz – whom we congratulate for his move to tenured status at Nebraska. We all marvel at Europe’s misplaced enthusiasm for regulating the Internet. This fall the Europeans returned from their August vacation to embrace a boatload of gobsmackingly unrealistic tech mandates – so unrealistic that you might almost think they’re designed to allow the endless imposition of crippling fines on Silicon Valley.

In the last week or so, European institutions have pretty much shot the regulatory moon: Matthew sets out the European Parliament’s expensive and wrongheaded copyright rules. Paul covers the European Commission’s proposal that social media take down all terror-inciting speech within one hour, on pain of massive fines. Gus discusses the European Court of Human Rights’ ruling that GCHQ’s bulk data collection practices fail to meet human rights standards, though they can be fixed without dumping bulk collection. And I marvel that France is urging the European Court of Justice, which needs little encouragement to indulge its anti-Americanism, to impose Europe’s “right to be forgotten” censorship regime on Americans and on other users around the world. That’s a position so extreme that it was even opposed by the European Commission. Gus explains.

In other news, Paul outlines the National Academy of Sciences’ report, offering a sensible set of security measures for American voting systems. We all unpack the new California IoT security bill, which is now on the governor’s desk. I predict that, flawed though it is, ten more state legislatures could adopt the bill in the next year.

This Week in Social Media Bias: Paul tells us that Twitter has found a deep well of hate speech in … the United States Code. I tell the ambiguous story of offering up my Facebook account to verify claims of social media censorship.  And Gus reports that the Left has discovered a problem with fact checking for social media posts; to their surprise, it doesn’t always work in their favor.

In closing, we quickly touch on the meltdown of the world’s biggest identity database and The Intercept’s endlessly tendentious article trying to make a scandal out of IBM’s face recognition software, which can apparently search footage by skin color.

You can subscribe to The Cyberlaw Podcast using iTunes, Pocket Casts, Google Play, or our RSS feed!

As always, The Cyberlaw Podcast is open to feedback. Be sure to engage with Stewart on social media: @stewartbaker on Twitter and on LinkedIn. Send your questions, comments, and suggestions for topics or interviewees to CyberlawPodcast@steptoe.com. Remember: If your suggested interviewee appears on the show, we will send you a highly coveted Cyberlaw Podcast mug!