« Obama Administration Dominates 2014 Awards for Dubious Achievements in Privacy Law | Main | The Sanders Letter: Is This the Dumbest NSA-Hating Stunt Yet? And Did Ted Cruz Fall For It? »

The Intelligence of Plants

The New Yorker has a remarkably thought-provoking article on what some call the "neurobiology" of plants.  That's a deliberately edgy way of pointing out just how much communicating and sensing and adapting plants do, all without anything resembling a brain. Some samples:

Plants have evolved between fifteen and twenty distinct senses, including analogues of our five: smell and taste (they sense and respond to chemicals in the air or on their bodies); sight (they react differently to various wavelengths of light as well as to shadow); touch (a vine or a root “knows” when it encounters a solid object); and, it has been discovered, sound. In a recent experiment, Heidi Appel, a chemical ecologist at the University of Missouri, found that, when she played a recording of a caterpillar chomping a leaf for a plant that hadn’t been touched, the sound primed the plant’s genetic machinery to produce defense chemicals. Another experiment, done in Mancuso’s lab and not yet published, found that plant roots would seek out a buried pipe through which water was flowing even if the exterior of the pipe was dry, which suggested that plants somehow “hear” the sound of flowing water.... 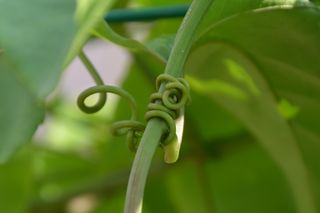 Mimosa pudica, also called the “sensitive plant,” is that rare plant species with a behavior so speedy and visible that animals can observe it; the ... mimosa also collapses its leaves when the plant is dropped or jostled. Gagliano potted fifty-six mimosa plants and rigged a system to drop them from a height of fifteen centimetres every five seconds. Each “training session” involved sixty drops. She reported that some of the mimosas started to reopen their leaves after just four, five, or six drops, as if they had concluded that the stimulus could be safely ignored. “By the end, they were completely open,” Gagliano said to the audience. “They couldn’t care less anymore.”

Was it just fatigue? Apparently not: when the plants were shaken, they again closed up. “ ‘Oh, this is something new,’ ” Gagliano said, imagining these events from the plants’ point of view. “You see, you want to be attuned to something new coming in. Then we went back to the drops, and they didn’t respond.” Gagliano reported that she retested her plants after a week and found that they continued to disregard the drop stimulus, indicating that they “remembered” what they had learned. Even after twenty-eight days, the lesson had not been forgotten. She reminded her colleagues that, in similar experiments with bees, the insects forgot what they had learned after just forty-eight hours. ...

Time-lapse photography is perhaps the best tool we have to bridge the chasm between the time scale at which plants live and our own. This example was of a young bean plant, shot in the lab over two days, one frame every ten minutes. A metal pole on a dolly stands a couple of feet away. The bean plant is “looking” for something to climb. Each spring, I witness the same process in my garden, in real time. I always assumed that the bean plants simply grow this way or that, until they eventually bump into something suitable to climb. But Mancuso’s video seems to show that this bean plant “knows” exactly where the metal pole is long before it makes contact with it. Mancuso speculates that the plant could be employing a form of echolocation. There is some evidence that plants make low clicking sounds as their cells elongate; it’s possible that they can sense the reflection of those sound waves bouncing off the metal pole.

Since the early nineteen-eighties, it has been known that when a plant’s leaves are infected or chewed by insects they emit volatile chemicals that signal other leaves to mount a defense. Sometimes this warning signal contains information about the identity of the insect, gleaned from the taste of its saliva. Depending on the plant and the attacker, the defense might involve altering the leaf’s flavor or texture, or producing toxins or other compounds that render the plant’s flesh less digestible to herbivores. ... Several species, including corn and lima beans, emit a chemical distress call when attacked by caterpillars. Parasitic wasps some distance away lock in on that scent, follow it to the afflicted plant, and proceed to slowly destroy the caterpillars.

I can't help tying these capabilities to the Next Big Thing in computing:  the Internet of Things, more properly thought of as mass deployment of sensors. In many ways, that's a capability in search of an application.  It's easy to wire your house so the network knows what room you're in, but really, why bother? In contrast sensors that can eavesdrop on plant communications could have lots of applications.  Farmers can wait to apply pesticides until their crop tells them which pests are attacking which plants.  Hunters can ask the forest where deer congregate to do their browsing. Maybe the grass in minefields is already broadcasting the location of the explosives its roots are avoiding.

Lots of these capabilities could be built into smart phones, perhaps with sensor attachments.  Even more sophisticated work could be done with special purpose devices mounted on drones or just on the Google Street View car.  It's nice to have pictures of houses along the road, but imagine Google Plant View:  a map of everything the plants know about a neighborhood:  soil types and pH content, homes with toxic molds, the progress of invasive insects, herbivores, and plants.

Of course we'd have to be able to translate plant volatiles into English.  Or maybe Italian, since the "poet-philosopher" of the field is an Italian researcher by the name of Stefano Mancuso; and he has already begun to assemble a dictionary:

His somewhat grandly named International Laboratory of Plant Neurobiology, a few miles outside Florence, occupies a modest suite of labs and offices in a low-slung modern building. ... Giving a tour of the labs, he showed me ... a chamber in which a ptr-tof machine—an advanced kind of mass spectrometer—continuously read all the volatiles emitted by a succession of plants, from poplars and tobacco plants to peppers and olive trees. “We are making a dictionary of each species’ entire chemical vocabulary,” he explained. He estimates that a plant has three thousand chemicals in its vocabulary, while, he said with a smile, “the average student has only seven hundred words.”