Anonymous claims to have struck a blow in Aaron Swartz’s memory.  It has hacked the website of the US Sentencing Commission and posted a long manifesto and a group of files named after Supreme Court Justices.  The manifesto suggests that the files contain embarrassing secrets and declares that the secrets will be revealed in installments unless Congress adopts sentencing and computer crime changes.

Exactly what the files contain the screed leaves uncertain: "The contents are various and we won't ruin the speculation by revealing them. Suffice it to say, everyone has secrets, and some things are not meant to be public.” 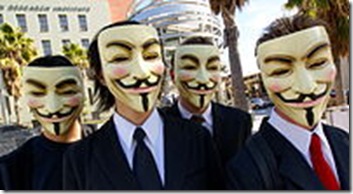 It’s possible that this is an elaborate publicity ploy.  The manifesto’s authors don’t exactly say they have information stolen from Supreme Court justices.  And they are careful to suggest that if investigators find no sign of intrusion, well, that’s just proof that Anonymous is “far more ambitious, and far more capable” than investigators think: “Over the last two weeks we have wound down this operation, removed all traces of leakware from the compromised systems, and taken down the injection apparatus used to detect and exploit vulnerable machines.”  So this might be a big deal, or, having made a media splash out of simple website defacement, the hackers may announce in two weeks that all they wanted to do was cause a frenzy of investigative activity without actually hacking any Justice’s computer.

In the meantime, though, the episode is likely to sully Aaron Swartz’s memory. Swartz was egregiously overcharged, but there isn’t much doubt that he violated the Computer Fraud and Abuse Act.  We see the charges as unfair because Swartz’s “liberation” of data was motivated by a commitment to open data and not by any criminal intent.  Now comes Anonymous, claiming to be liberating data in Swartz’s name but doing so with unquestionably criminal intent -- to extort policy changes and to cause pain to government officials for their views and actions.

The exploit is probably counterproductive too.  Apart from turning those who want reform of computer crime law into the allies of lawbreakers, Anonymous has substantively hurt the case for amending the CFAA. Heavy criminal penalties are entirely appropriate for people who hack a Supreme Court Justice’s account and disclose personal secrets. But it’s not easy to redraft the CFAA so it reflects the difference between Swartz and the Anonymous hackers, at least not without relying on precisely the prosecutorial discretion that the Swartz prosecutors misused.

Finally, I wonder if this incident won’t affect the Supreme Court’s approach to cybercrime issues.  As Frank Rizzo once said, a conservative is a liberal who’s been mugged.  If that’s true, every time Anonymous mugs one of the Justices in cyberspace, it could be making the Court just a little less enthusiastic about limiting the tools the government uses to deter computer crime.