« The Right to Be ... Oh, Forget It | Main | More on Attribution and Retribution: Si Chuan University and Tencent »

Sex Secrets of the Security Line

“I … watch him working at the stove.  His easy concentration, economical movements, setting up in me a procession of sparks and chills.”

Three pages after this passage, Alice Munro’s virginal young narrator goes to bed with the man at the stove. That will come as no surprise to most readers, but it's an aspect of human nature that seems to have eluded the Transportation Security Agency.

It’s Thanksgiving weekend, when most of us get to spend at least some time thinking about TSA. I’ve spent mine puzzling over the roots of TSA-hatred.

There’s no doubt that it’s virulent. As a privacy skeptic and national security conservative, I’m used to hostile comments.  But it’s only when I defend TSA that the comments go beyond hostile to visceral and occasionally even spittle-flecked.

Why is that? Notwithstanding the venom of the TSA-haters, polls show that most Americans support TSA, including the decision to use whole body scanners. But for a very vocal minority opposing the agency isn’t political. It’s personal.

I can’t explain the women who hate TSA with a passion.  But I’m not sure how many there are.  Anti-TSA sites and comments have a distinct whiff of testosterone. If you’re one of those men, I ask whether this sounds familiar:

It starts before you get to the airport. Get your liquids in a clear, quart-size bag. I keep a cache of travel-size toothpaste and shaving cream in a sandwich-size baggie; I’ll reuse it on about a half-dozen trips before it wears out. Put the baggie on top of everything in your carry-on. The people who have the hardest time are the ones opening up their bags in line to find their liquids. That wastes precious time. I put my laptop and Kindle in an accessible pocket outside my carry-on. Next, take your ID out of your wallet and put it in a breast pocket with the boarding pass. I almost always wear a sports jacket when traveling. Why do I do that? Pockets. Take all of your small electronics and put them in jacket pockets, along with change, keys, and your wallet. When you get to the line, you just take your jacket off and put it in the tray. That’s the main trick: Instead of unloading my pants pockets in the line, I prepack my jacket. In the airport, after you show your documents, put your license back in your pocket—you don’t want to lose it. At the bag screening, the shoes go off first—I always wear loafers. Then I put my jacket in a tray behind the shoes, and my liquids on top of the jacket. The laptop goes in the next tray, then my carry-on follows. I sequence it that way so I can reverse the unpacking process at the other end. You put your shoes and your jacket on, then your hands are free to grab the liquids and the laptop, and the bag’s right there.

That’s Michael Chertoff talking, former Secretary of Homeland Security, my former boss, and a legal and financial force in Washington.  He’s got a lot to think about. Is this really a good use of his time?  After all, how efficiently he performs in the security line is going to make – what? –- maybe a one-minute difference in how fast he gets through the line?

It may not make sense. But I’m willing to bet that a lot of the men reading this have similarly choreographed plans for the security line.

I know I do. And if I’m honest with myself, the rituals of the screening line aren’t really about speed.  They’re about performance.  I feel a kind of competitive pressure to keep the line moving. I’m not happy to see more than about six inches of distance between my luggage and the bags in front of me on the belt. Every delay in pulling out my laptop or my liquids, every last minute bit of change I have to throw haphazard into the bin, every stutterstep as I realize it’s a whole-body scanner, not a metal detector, so belt and watch have to come off too –- all detracts from the performance.

Every once in a while, though, everything goes right, and I feel great. I’m Michael Chertoff, baby, all smooth competence, no wasted motions, no hesitation, no gaps on the conveyor belt.

OK, that’s a little embarrassing to admit.  But it gets worse when I ask myself why I care.  If you’re the kind of guy who can’t throw away a piece of paper without wadding it up and arcing it across the room, you already know.

In part we do it to keep our place in the hierarchy of guys.  But in the end, what we’re really hoping for is an Alice Munro moment -- that our easy concentration and economical movements will set up in someone “a procession of sparks and chills,” followed a few pages later by, well, what we deserve for all that demonstrated competence. 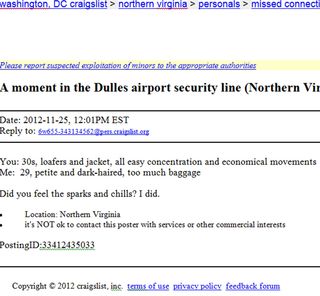 And that means that TSA has an Alice Munro problem.  Because it’s the TSA agent who points to the phone that’s still on your waist and sends you on the walk of shame back to the conveyor belt, every prospect of chills and sparks annihilated.

Worse,  TSA keeps changing its routine.  Shoes in the bin or shoes on the belt? Wallet in the bin or in your pocket? Boarding pass in your hand or on the belt?  Just when we learn the ritual, there’s something new. How well would LeBron perform if the NBA kept moving the basket?

It’s even more of a problem if the TSA officer shows even the slightest attitude. The only thing worse than failing publicly is having your nose rubbed in the failure.  Every time I walk the walk of shame, I find myself on full alert for even a hint of criticism or superiority from the TSA officers around me; I'm just one word or lifted eyebrow away from going into full junior-high-school rebellion mode.

If I’m right about the roots of TSA-hatred, there's a lot the agency could do to ease the problem. Start with the officers. They’ve already become far more professional and hard to provoke.  That’s good, but there's room for more.  When protocols change, in particular.  After a week, the officers know the new routine cold, but for months after a change they’ll be dealing with people who don’t. It’s natural -- but unwise -- for officers to treat deviations from the new protocol as mistakes. Instead, to avoid triggering performance anxiety, the agency should adopt a self-deprecating and even apologetic tone. For months or years, the officers will need to say,  “I’m sorry.  We changed the rules again. Now we’re asking people to put their shoes on the belt, not in the bin.”

In fact, the agency should avoid any hint that it is judging our performance from on high. How about a sign on the way to the belt that says, “Forty of the forty-two TSA officers now on duty have forgotten their cell phones at least once while walking through the scanner.  We’re hoping this sign will help you avoid our mistake”? Or one that says, “We change our protocols from time to time to make life harder for terrorists.  We know it makes life harder for you too, and we’re sorry.  If you’ve got questions about the new procedures, just ask”? Maybe that video of John Pistole could include an interview where he talks about all the stuff he’s mistakenly tried to take through security -- water or pen-knives (maybe even guns – he was after all an FBI guy for most of his career).

In short, maybe TSA needs a simple new message for travelers:  We’re not judging you, we’re just trying to keep dangerous stuff off planes. Oh, and you’re not in a competition; you’re in a security line.

The new approach may not stop some travelers from hoping that our displays of easy concentration and economical movements in the security line could still inspire a procession of sparks and chills. But at least we won’t blame TSA when they don’t.

It’s worth a try.  We could call it the Munro Doctrine.

NOTE: Comments explaining that TSA is an intolerable intrusion on our freedoms that the rest of the country simply fails to grasp are inevitable, but those using the word "sheeple" or linking to stories from PrisonPlanet may be removed, or mocked.

FURTHER NOTE: No, that's not a real Craigslist ad.

I'm surprised you and Chertoff aren't Pre-Check cleared http://www.tsa.gov/tsa-pre%E2%9C%93%E2%84%A2 I happily submitted to the background check and hassle, sacrificing "privacy" so I can breeze through security like a judge at a court house.

I know, I know, someone is going to tell me that was a massive invasion of my privacy. But, while they're opting out, I'll be drinking a cold one in the United lounge.

I'm curious, is Pre-Check the evolution of CAPPS? If so, the privacy lobby should be ashamed for making me wait this long for it.

I just haven't gotten around to doing Pre-Check, but I agree with your sentiments. And yes, the privacy campaigners delayed Pre-Check by many years by preventing TSA from having access to passenger data of any sort. Pre-Check shows how screening can be improved if TSA has access even to traveler information.