Browsing my high school yearbook for a family celebration this weekend, I discovered that I may have actual information about a burning issue in the Presidential campaign -- namely, whether Mitt Romney was once a high school bully.

That's because I went to high school, or at least grades 7 through 10, with him. We weren't especially close.  He was a day student, I was a boarder, and Cranbrook threw me out after the tenth grade, on grounds that in retrospect strike me as eminently reasonable. So I wasn't there when he's alleged to have cut some other student's hair.

But I think I still can shed a little light on the bullying question.  In fact, this photo pretty much speaks for itself.  That's me on the left, and Mitt on the right.  He was the third smallest kid in the eighth grade. That's not a good position from which to begin a career as the school bully. 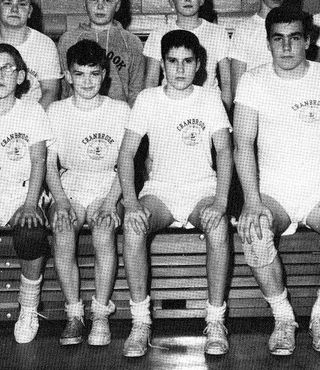 With enough determination, I suppose you could give it a try. But you'd have to limit your attention to the two smallest kids.  One of whom was me.

And I would remember if I'd had to spend my days dodging Mitt Romney. Getting picked on in high school is not something you forget. In fact, though, none of my admittedly small store of Mitt Romney memories suggests that he had a mean streak, even when dealing with a height-challenged candidate for the school literary magazine and drama club.

Admittedly, whether Mitt Romney was a bully in high school is not on quite the same level as whether George W. Bush drove drunk or Bill Clinton (let alone Barack Obama) inhaled, but it looks like this is as close as I'm likely to get to an election-year scandal.

So I'm planning to milk it.

Next up:  just how cheap Mitt was in high school, and what that may say about his deficit reduction program.