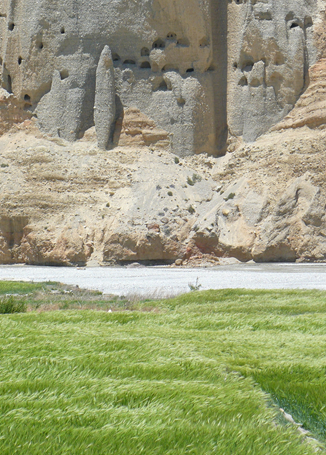 Today we’ll finally leave the vast gravelly bed of the Kali Gandaki river, climbing to 3,000 meters. We begin by dropping to the Kali Gandaki and crossing a few of its braided channels on makeshift wooden footbridges. The trail then takes us up onto hills and cliffs overlooking the river.

We set a blistering pace, bolstered by maximum strength ibuprofen. Sandstone rises on all sides, often as great cliffs. In a few places, manmade caves have been hacked from the sandstone, probably in the days when raiders marched regularly through the valley. The caves may once have been reached by steps and handholds carved from the rock, but these have long ago eroded away.

After a few hours, we stop for lunch at Chhusang, the last truly Nepali village along our route. From here we’ll climb away from the Kali Gandaki and into regions more influenced by Tibet's culture than Nepal’s.

Like all the villages, Chhusang's gardens have high walls to keep out wandering livestock. We walk next to a shallow stream that has been diverted to slab along the hillside and then drop to the walled gardens. There it irrigates a several-acres oasis -- startling green against a landscape that otherwise resembles the drier parts of Wyoming.

Crossing the Kali Gandaki for the last time on a metal foot bridge, we immediately begin climbing a slippery sand and gravel trail that wriggles chaotically up a steep slope – and marks the real boundary between Nepal and the ancient Tibetan kingdom of Lo.

The altitude makes itself felt now; we strain to breathe deeply enough to keep moving. After an unrelenting 15 minutes, we’ve raised our altitude two or three hundred meters and are entering Chelle, the first Tibetan village of the region. 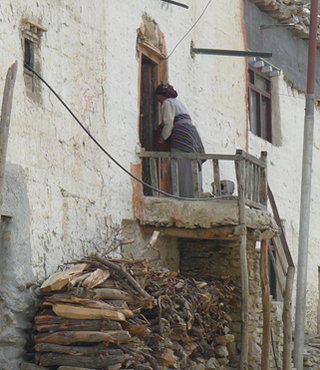 Chelle too has the region's distinctive walled oases, dominated by stands of apple trees that look nothing like the apple trees of North America. The architecture of the town is distinctive too, and so is the atmosphere. There are far more animals; indeed, they share the town, and even the homes, with the human residents.

Cows, mules, and goats get the bottom floor of most homes, while people get the top floors. The homes feature an interior atrium, making it easy for the residents to keep an eye on their livestock. A roof closes off the atrium, often topped with glass or plastic to let in light. Otherwise, the roofs are flat, habitable spaces that add what amounts in this dry country to a third f loor. Thigh-high stacks of firewood act like balcony walls at the edge of the rooftops.

I ask whether residents burn the wood in the winter. No, I'm told. The wood is too valuable to burn.  If they need a fire, most residents burn twigs and cow dung.  These firewood parapets aren't about utility; they're about prestige.  Firewood is so rare and expensive that having a cord or two on top of your house is a status symbol -- and thus too precious to burn. 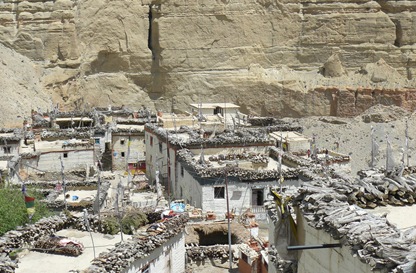 It’s noticeably colder here, and I wonder aloud how having an open atrium works in the long Himalayan winter. Turns out, many of the villagers drive their horses and marketable livestock south along the river, sell the livestock, pen the horses, and head to balmy Pokhara to get temporary jobs.

Lo in winter is a harsh land, with waist-deep snows. But it's just a 6-day walk to a balmy climate. Who wouldn't go if they could? It reminds me of all the wheat farmers in Manitoba who lock their barns and fly to Arizona for the winter.

With every square yard of farmland precious enough to tend by hand, and every animal a part of the family home, overpopulation is always a risk. There just isn't enough land to keep subdividing it for each new generation. In response, I’m told, the Lo people have devised some remarkable cultural innovations.

In the old days, and perhaps even today, brothers might share not just a farm, but a wife. That way, the fields can be handed down from one set of brothers to a single set of descendants. Marrying two men to one woman didn’t produce an excess of old maids, locals say, because girls were often scarce. I don’t have the heart to ask why. 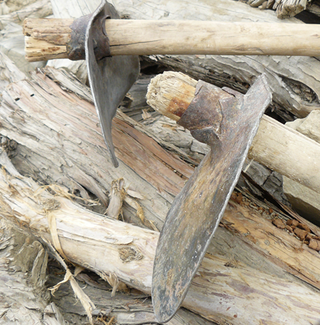 In any event, the gender mismatch might not last long. If a wife didn't produce an heir, her husbands were allowed to take a second wife; the alternative, not having another generation to inherit the fields, was unthinkable.

Finally, the last resort for sons and daughters who didn't inherit or find a mate with prospects was one that the second sons of European nobles would have recognized – organized religion. Unmarried men and women were sent to monasteries where they worked and held the land in common.

Posted at 12:57 PM in Misadventures in the bush | Permalink