Today we are retracing our original path, making the long descent to Chelle, the last of the “Tibetan” villages along the trail.

We pass the same road construction machinery that blocked our path on the way up. The road builders have made visible progress since we passed this way last week. I have new appreciation for the difficulties the road builders will face. Finding a way for cars and trucks to navigate those grueling staircases won’t be easy. But with enough blasting powder, the road will get through, even if flash floods and rockfalls occasionally cut the road during wet seasons. And that will make an enormous difference in Mustang’s culture. We were privileged to see it before the trucks start grinding through the villages, bringing cheap beer, wifi hotspots, and HIV.

Back in Chelle, the teahouse that we had to ourselves last week is now packed. More than a dozen French trekkers are using the adjacent campground and enlivening the common rooms. Germans, New Zealanders, and others have taken over the remaining rooms. They are all bound for the Tiji festival in Lo Manthang.

All day on this leg we’ve met party after party hustling toward Lo Manthang for the same reason. I’m sorry we missed the festival, but in the end I suspect it’s a bit like our audience with the king – a maguffin, more exciting in prospect than in reality. And it turns out that by missing the festival we earned a bonus -- walking to Lo Manthang alone, scarcely seeing one foreigner a day, even after we stopped for the night. These trekkers will never be alone. They’ll be passing and repassing each other every day, queuing with each other outside the latrines, and straining Lo Manthang to the bursting point when they arrive.

To our eyes, the mass of festival trekkers on this leg looks like a freak – completely out of proportion to normal travel levels before or after the Tiji crowd. The Tiji bulge resembles a pig making its way through a python, or a baby boom making its way through a nation’s demography. But the Tiji trekkers, like the boomers, won’t see it that way. The crowds and the queues will be their normal, never changing as they move up the valley. They won’t realize how rare it was to meet other hikers on the trail just a few days on either side of the trek they took. 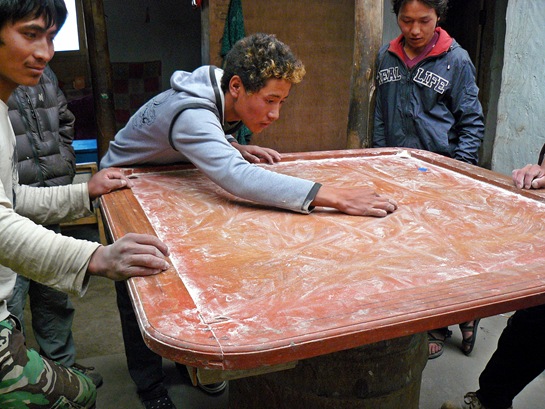 We’ve been looking for a chance to play carom, a game that we’ve seen porters playing all along the trail. Carom resembles pool, if pool were played with poker chips on a table about 3 feet square, with a raised lip and a hole in each corner. In the middle of the table are eleven poker chips. Each player has an outsized chip that he flicks at the other chips. The object is to be the first to drop your 5 chips and then the “queen” into the corner holes. A crack pool player, Gordon has deduced the rules.

Now we’ve found a carom joint that is willing to let us try our hand. When the raucous Nepali game ends, a few observers linger to watch the Westerners make a hash of their game. Accurately flicking a chip at a target turns out to be remarkably difficult. By luck, I get one chip almost on the lip of a hole across the table from me. Then I waste ten turns just trying to hit the damn thing, and when I do, it moves further from the hole. Gordon is better, but only at the theory. He understands the angles and possibilities better than I do, but his execution is just as bad. We battle to a tie, with each having a single chip, plus the crucial red queen, on the board. By then, all observers have drifted away in disgust, unable to extract even comic relief from our efforts. At that point it was safe for me to let Gordon win. That’s my story, anyway, and nothing will shake it; there were no witnesses.

Posted at 09:12 AM in Misadventures in the bush | Permalink