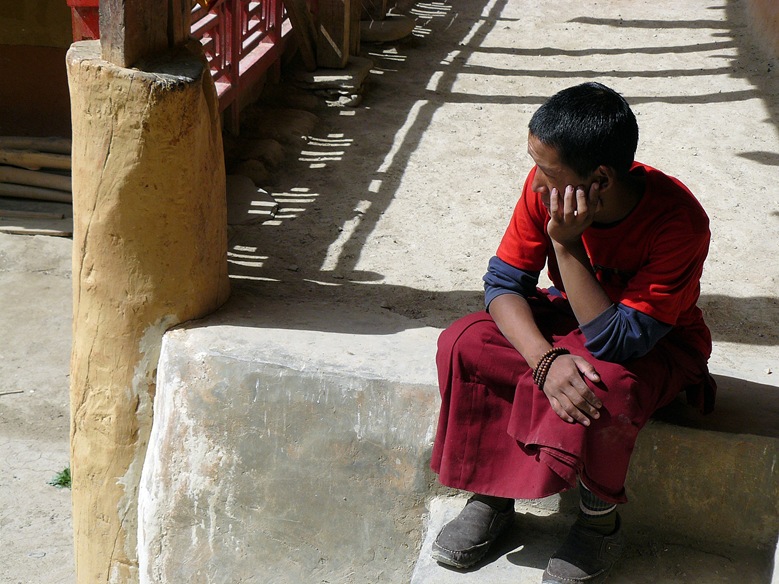 After breakfast, we head up the valley, me riding, Gordon walking. We’re making for a gompa on a hill a few miles to the north. When we arrive, the gompa is locked. It looks down at heels, and finding the custodian takes so long that we nearly leave. When he does come panting up the trail from the village, though, the custodian proves to be a young, chatty fellow who is full of information. Not himself a monk, he nonetheless provides a detailed tour of the gompa's ceremonial hall. It has extensive murals, a wall of religious texts in special containers, and a host of musical instruments. In winter, he says, every village family but one heads for lower and warmer ground, along with most of the monks. He stayed this winter, enduring waist-high snows and bitter cold, shoveling snow off the gompa roof so no water could seep in to wreck the murals. It occurs to me that someone must have done this every winter for centuries to preserve the murals he's just shown me.

If you have to stay the winter, he says, it's better not to be a monk. The villagers who stay can eat their animals to keep up their strength. The monks are vegetarians, and vegetables aren’t easy to find in Mustang in winter. But the monks who stay through the winter have to live on potatoes they've buried in the dirt during the summer. True, they have a greenhouse to speed the arrival of summer vegetables, but it's late May now, and there are no new crops; the monks are still digging up last year's potatoes.

He takes us outside and points at the border with China – a series of low hills no different from those we’ve crossed many times already. No wonder the traders -- and the Khampas – were fond of Mustang. And no wonder the Chinese are working so hard to extend their influence here. The custodian tells us that the Chinese distributed food to all the villagers this winter. Despite the largess, he remains skeptical of their motives. Nepal has no troops on the border, he notes, while China has many. Nepalese crossing into China need to get permission for every trip, he adds, but Chinese officials cross the border at will, with no permission that he’s aware of. He confirms that the caravan we saw yesterday was Chinese.

In a nearby village a home is under construction. All of the houses we encounter seem to be built in the same general way. Even the modern materials incorporated into the houses follow a traditional pattern. 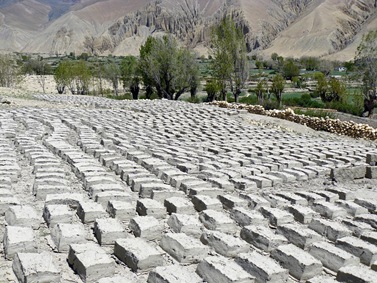 By far the most common building materials are sundried mud bricks, perhaps one foot long and six inches square. They can’t be kiln-dried because firewood is too scarce. So vacant fields are regularly filled with rows of bricks curing in the sun. They look like post-modern war memorials.

What wood is available is used mainly to frame doors and windows and to construct the higher floors. In the first floor, it looks as though stones surmounted by mud bricks make up the walls, although mud seems like a dubious load bearer.

For higher floors, poles are set in the ground to support large rafter-type horizontal poles. Across these main rafters are laid a series of lesser poles at two-foot intervals. These are then spanned by one-or-two-inch wooden strips. Atop the strips is hay impregnated with mud. At the end of the day, the houses are sticks and mud, and I realize that, without careful upkeep, all of this -- walls, buildings, whole gompas -- will melt back into the landscape. In fact, many of the hilltops carry ruins that are halfway through the transition from buildings to eroded mounds of dirt.

Posted at 08:18 AM in Misadventures in the bush | Permalink