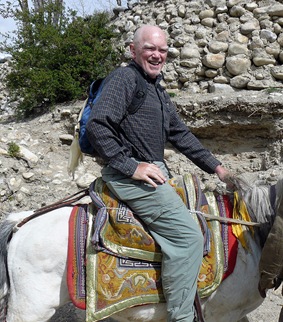 Today and tomorrow, instead of moving on, we will make Lo Manthang our base for day trips. Today we rent a horse to get to Choser, a small village about an hour or two from town and the site of the third and last school where we’re dropping off books and toys.

It's an Asian mountain horse – a pony, really. I could walk alongside him with my arm slung companionably over his back. Horses in Mustang are guided largely by the grunts and whistles and shushes of their herdsmen. They're mainly used as pack animals, and using verbal cues lets a single herdsman guide the whole pack train from behind on the mountain trails.

Leaving the walled city, we move through dust as fine as talc. It rises in great clouds as we walk. The villages all have a rhythm. In the morning as we’re leaving, herdsmen are dr

iving their livestock out of the village and up to the hills where there is a bit of grass. Bells on cows and horses ring as they pass. Herds of goats also move toward the hills, the kids jumping on every wall they pass through the villages, dancing with enthusiasm.

One reason this region was closed to foreigners until the 1990s was its role as a center of armed resistance when China invaded Tibet. Not all Tibetans met the invaders with spirituality and passive resistance. The Khampas were a Tibetan tribe that fought back. Famous and feared as warriors, they wore their hair long and fought China for decades after the 1950 invasion, raiding from refuges across the border in Nepal. Mustang was one of their principal staging areas because it had such a low pass into Tibet. I discover that the CIA supported the Khampa warriors, even flying some to Colorado for advanced training. CIA support for the insurgents gradually diminished, ending for good in the early 1970s. Not much later, the Nepalese government, likely under heavy pressure from China, forced the Khampas to disarm.

After that experience, it is no surprise that the Chinese have built a road across their border and into the heart of Mustang. They want to be sure that they can respond in force if guerrilla war ever returns to the region. Meanwhile the road makes it easy for Chinese officials to visit Lo Manthang. As we hike along the road, a convoy of late-model SUVs suddenly rounds the turn and heads toward us at high speed. We scramble out of the way as the cars, two white and two black, splash through a stream and past us.

The Nepalese tell me not to get too close to the Mustang-Tibet border. “Local people can cross there. They’re known,” says one, “but if we Nepalese go there, maybe they’ll arrest us, torture us. We don’t know.” 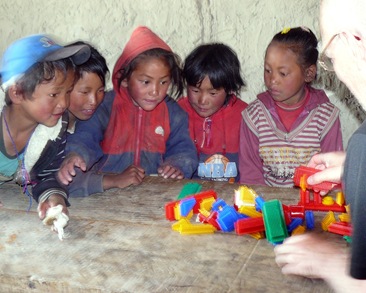 The third school is a public boarding school for the district. It serves 120 students. Students spend 8 months of the year in Choser, but in winter the whole school transfers to Pokhara; it’s just too cold to stay in Mustang.

The Chinese government, evidently on a charm offensive here, has paid for the construction of a science lab that’s still being completed. It contains a large multipurpose room with twenty Compaq laptops running Windows 7. The school also boasts a large array of solar power panels to power the place. The library, though, is the least impressive we’ve seen.

We end the afternoon with a visit to caves built into local cliffs. Window holes poked through the rock wall expand into interlocking rooms that extend deep into the cliff. The rooms rise five stories high, one level linked to the next by crude ladders or carved foot-holds. Moving from one room to another sometimes means jumping over holes that lead to the level below. The ceilings are stained shiny black with soot from 2500 years of fires.

This is where local villagers used to hide out when raiding parties from Tibet or Nepal rode through the valley. The only problem was that if the raiders settled down for a siege, they could cut off the defenders' water. Once, the story goes, besieged cavedwellers had almost run out of water; desperate, some of them poured mustard oil over their heads and leaned out of the windows, dripping wet, to mock the invaders. Convinced that the villagers had plenty of water and that the siege had failed, the raiders moved on. 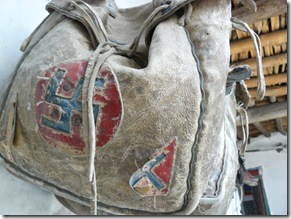 Today, the villagers are building an irrigation terrace at the foot of the caves. Everything must be done by hand. Men and women use picks to pull earth from the uphill side of the terrace. They shovel the loose earth onto stiff, flattened animal hides; other women drag the hides across the terrace and dump it on the downhill slope, extending the terrace by perhaps an inch or two. I think that they’ve probably been using the same techniques for the last 2500 years.

Posted at 06:19 AM in Misadventures in the bush | Permalink