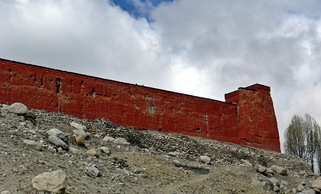 Hard beds make for a bad night. On the whole, the room beds have been fine – narrow cots with a very firm foam mattress. More disturbing is the lack of sheets and pillowcases. The pillows (also very firm, bordering on unyielding) have permanent looking cases covered with embroidered designs – too fancy to change every day or even every week. Ditto for the blankets. As I lay awake last night listening to an indefatigable barking dog, just the barest hint in the air left me convinced that some traveler has thrown up on my blanket -- and that washing it in cold water wasn’t quite good enough.

Today’s hike is a sprint to Lo Manthang. We mostly follow the new Chinese road, which climbs steadily without the steepness of a footpath.

We walk for a time with a European aid official. The official was pleasant and clearly loved Nepal. But the official reminded me again that our aid programs have a kind of moral vanity at their heart, as rich nations pay poor ones to do things we wish we were doing. This official bemoaned the Chinese road, not just as hegemony (“The Chinese are imposing their goods on Mustang”), but for the change it will surely bring (‘they insist on making the same mistakes as us”).

I, too, will be sad when the road breaks through the last few kilometers to Chelle, and goods and people begin moving swiftly throughout Mustang. When that happens, hiking from in Mustang will become a choice, a form of recreation, and not simply the only way to see the country. Plus, the traffic will make the trip nasty and dangerous for walkers.

But I know that is simply an aesthetic preference, and one that it would shameful to impose on people who measure their net worth in cords of firewood. What kind of aid program, I wondered, do you get from countries whose officials believe that roads are a “mistake” for less developed countries? Apparently a lot of very well engineered footbridges, to hear what this official was proudest of. Maybe suspension footbridges are a good idea, but there is a whiff of patronization in such a gift: “We'll help you walk, but don't ask us to help you drive!”

Four hours of concentrated hiking brings us at last to Lo Manthang. This walled city was once the seat of an independent kingdom. The king and the kingdom were Tibetan in culture, but they also had close ties to Nepal. The Loba, or Lo people, spent several centuries exploiting the low pass that leads to Tibet, trading salt from India for crops and animals from the Tibetan plateau. The ruling dynasty has been a dependency of Nepal for a century or more. The current raja of Lo retained some autonomy until the 1990s, when he accepted the rank of Colonel in Nepal’s army in exchange for more complete integration into Nepal’s government. Then, in 2008, when Nepal's royal family abdicated and Maoists joined Nepal’s government, the last vestiges of the Kingdom of Lo were also abolished. The raja, born in 1933, still lives in Lo Manthang and mediates local disputes, but he has no formal authority. 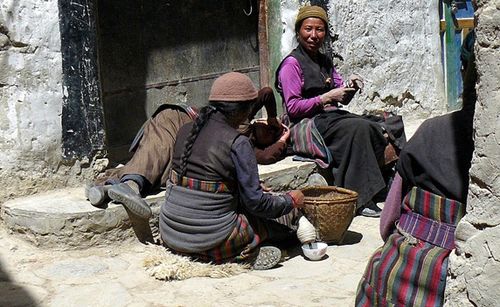 The raja met with the first few visitors allowed into Manthang in the 1990s, and their accounts of the meetings are quite charming. We discover that the raja still grants audiences to trekkers. It is necessary to buy an admission ticket for the palace, a great hulk in the center of town, and to bring a traditional scarf or prayer flag.

And one more thing, says our guide. It would be good to bring him a present. 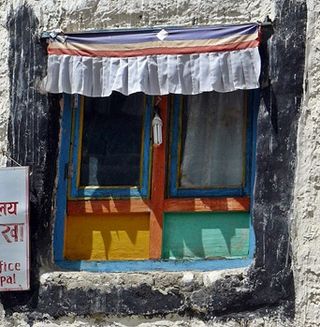 Hmm. This is complicated. I am not carrying a lot of extra gear suitable for a gift.

Not likely, I'm told. But a bottle of whiskey would not be amiss. Perhaps that’s when doubts about this audience began to creep in.

But still. I’ve never been received by royalty before. This could be exciting. I dust off the talent for pleasant chats with foreign officials that I once had to draw on every week while in government. Will he speak English, I wonder, or will we have to wait for translation? What is the proper protocol for introducing Gordon, for entering the audience room? What about photographs? I have no protocol officer to advise me; I'm going to have to improvise. And then
there’s my clothes. It’s too cold to wear anything less, but I’m pretty sure that dusty boots and a watch cap aren’t the usual attire for royal audiences in other parts of the world. Meanwhile, we have time to explore the city. The walls are impressive – twenty feet high, with watchtowers that are even higher. And they would have to be, becau
se apart from a steepish hillside below one wall, Lo Manthang has no natural defenses to work with – no cliffs, riverbanks and the like. There’s a river at the foot of the hillside – or at least a creek, because without irrigation there would be no agriculture and no city in this vast dry land. A tiny tributary runs right into the city, but there’s little room for agriculture within the walls.
Instead, Lo Manthang is a warren of high homes in the traditional layout – animals on the ground floor, living quarters above, and a flat roof for working in the sun.

Temples are everywhere, along with monks, who support a large monastery here. Outside the palace, there's a square where people congregate to watch the tourists, to spin prayer wheels, and to chat. This is where the residents will hold the Tiji festival in a couple of weeks.

A light rain is falling, but it cannot drive the villagers away. As in many other parts of Mustang, the heart of social life here is the public faucet, where women gather to wash pots, clothes and themselves. Everyone is friendly, and only a few are importunately selling souvenirs. Walking the alleys of Lo Manthang, I understand the spell that Nepal casts on Westerners. Almost all of the residents are dignified and friendly. There’s isn't the whiff of predation that often taints encounters with the locals in poor countries. Even the salesmen take no for an answer. And, after two toy distribution sessions, what impresses me most about the c
hildren is their discipline and cooperation. Not one child has grabbed a toy to play with alone. They take great care to handle the new toys cautiously and to share them with others.

Our guide enters the room. “Quickly please!” he says. “The raja will see you now.” We assemble in front of the palace and a young woman gestures us up the stairs. It's the biggest building in Lo Manthang, but it doesn’t look much like a palace. What it does look like is a major reconstruction project that was halted halfway through, with piles of dirt and abandoned planks lying about in lightless gloom. The stairs are bare planks, rising like a ladder laid against a house. You really need a handrail. There is one, but it's simply a rounded strip of wood nailed to the stairs themselves. Surprisingly, that works fine, because the stairs rise so steeply that two or three steps bring the handrail to waist level. We climb two levels in the gloom. It's a five-story palace, and it occur

s to me that perhaps the bottom two floors have been reserved for livestock, following a traditional Tibetan layout.

Sure enough, after climbing through the dark, we at last come to a living area, where an open atrium lets in light from the roof. We head up a third set of stairs. I’ve just seen a few people walk down these steps; they bent an inch or more when stepped on, so I try to stay close to the handrail.

Assembling at the top of the stairs, we are at last given a quick protocol lesson. Hold your scarf draped over both hands, and extend them to the king when you are presented. He will put it over your head, we’re instructed. 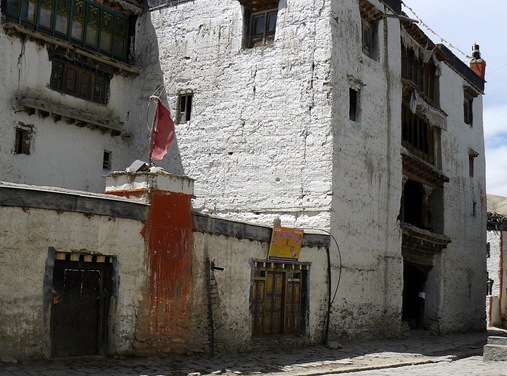 We enter the audience room. It has a dusty charm – good rugs, plenty of wooden furniture, and many pictures and other decorations on the wall. I approach the king. He is an old man seated on a comfortable bench.

Best of all, he’s wearing a watch cap and dusty boots.

We line up, scarves are placed over our heads, and we sit for a cup of tea. I put my bottle of whiskey on a table beside the king. He beams at me.

We sit, silent. The king occasionally looks over at us, but he obviously feels no need to make small talk. OK, I think, time to call on my rusty diplomatic chit-chat.

I open with praise for Mustang. It is translated. He gives me another smile. I introduce Gordon. Another smile, but less wattage. It’s becoming clear that small talk from visitors is not especially welcome. Instead, we’re told that when we’re finished our tea, we can kneel beside the king for a photo. We chug our tea and kneel for photos. The audience is over.

We make our way down the rickety stairs. The handrails are more necessary but less visible on the way down. We must go slowly, feeling for each step. When we get to the construction zone, my suspicions about livestock are confirmed. From the shadows, a mastiff begins barking. He’s savage, and determined to get at the intruders. Holes in the palace wall provide just enough light to see him in profile, straining against a chain and kicking up dust as he lunges at us. Taking the steep steps slowly and carefully becomes less of a priority. Half walking, half sliding, we burst through the palace door and tumble into the street.

Posted at 06:07 AM in Misadventures in the bush | Permalink

Thanks for providing informative post. I am going to share and bookmark. Finally I am going to subscribe your rss feeds to check coming update on your blog.