We can hear the monks chanting as we get up, followed by children's voices. Apparently, the whole village begins its day at the gompa.

We begin ours with a soul-destroying haul out of the valley, past the villagers watering their horses and tending to their herd. It’s only a 300 meter climb, but the altitude requires a self-conscious deep breathing rhythm if I don’t want to stop every 20 steps. I may finally have to admit that Gordon can now out-hike me. He is keeping up with our guide while I consistently lag back a few yards or more. 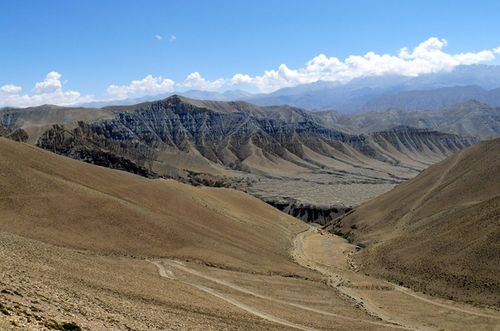 When we get to the top we’re just over 4000 meters. We descend rapidly to Ghemi, where we have an early lunch. The scenery is beginning to change, opening out into big dry hills, a bit more watered than New Mexico or Utah but with the same broad vistas of a rolling country mixed with eroded sandstone in vivid yellow and orange.

As always in a country of irrigated oases, the last mile or two to the next village is downhill. We’ve got some toys and books for the school in this town, called Tsarang. We don’t know much more about it than the name of the headmaster, and at first our guide reports that it’s closed. But the tearoom

proprietor recognizes the name and remembers Liesl Clark and her two kids. She calls the headmaster, Mr. Bista, and he shows us to the school. 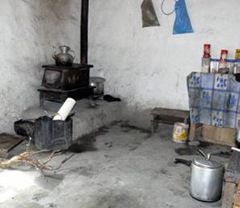 Many of the teachers are nuns, or anis, and the students can become monks or nuns if they have a calling, says the headmaster. The Ani School, as it’s called is far more basic than the school in Kagbeni. The kitchen is a simple stove and a few pots. Classrooms have nothing but blackboards and benches for sitting and for writing. The school does have an impressive solar electrical system but no way to store power, so anything requiring electricity needs to be done while the sun shines. The school also has one pretty new desktop computer (though a laptop would have been better given the power setup); the headmaster confessed that he knew nothing of the computer or what software it runs.

In contrast to the extremely basic facilities elsewhere, the library is spectacular – a big room with floor to ceiling bookshelves filled with Tibetan, Napal, and English works. Many US elementary schools have no better.

We hand over our maps and books, and I set to work on an enormous inflatable globe donated by a partner who asked only for photos of me blowing the damn thing up at altitude. An odd mix of generosity and cruelty, I thought, but he’ll get his photo.

The kids descend on the toys, paying special attention to a toy I had my doubts about – a felt house with felt furnishings that can be stuck to the house – felt chairs, felt tables, plus toilets, cats, dogs, bathtubs, clothes for the Mother and Father, and on and on, a cornucopia of felt goods that look grotesquely excessive in this simple school.

Many of the items are clearly not familiar household items in Tsarang. (I doubt most of these kids have used a sit-down toilet in their lives.) But the teacher uses the toy as a horizon-broadening device, describing each item as she helps the kids place it in the felt home. Mostly this works. But her explanation for the bubble-bath foam that goes with the bathtub is greeted with a mix of merriment and disbelief.

Posted at 04:19 PM in Misadventures in the bush | Permalink