We start today by continuing the grim uphill that brought us into Chelle, but the trail soon levels off to something more reasonable. We pass a piece of heavy machinery working on the road. Lord only knows how they got it up the slope that so disheartened us, but it’s a reminder that this region won’t be accessible only to walkers much longer.

The Chinese have already built a good dirt road from the Tibetan border to well south of Lo Manthang, so that only the country we’re hiking today separates the Nepali and the Chinese roads. 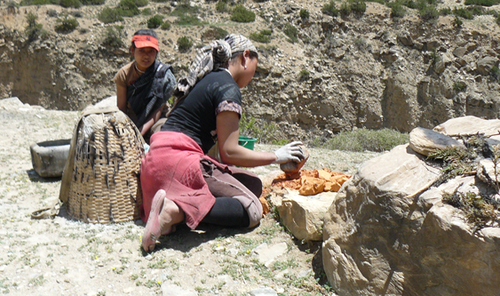 isolation tells. We are now deep in the last traditional Tibetan territory left in the world. Rams' skulls hang over doorways. At meals we are offered Tibetan bread (lightly fried, pita-like, and tasty) and Tibetan beer imported from the other side of the border. We pass people crushing rocks by hand to make the mineral dyes that color the mani walls and the gompas, or monasteries.

Stretching our day to 8 hours, we take several long slabbing trails in and out of side valleys, gaining altitude steadily until we hit 3700 meters. The trail is wide – probably to accommodate herds of goats and horses – but the dropoff is steep. Sidetrails lead to heart-stopping suspended footbridges.﻿﻿﻿﻿

We are suffering a little from altitude – on the uphill slopes, breathing itself feels like a chore. We’re stronger on this third day, but that doesn’t make the uphill sections easy. 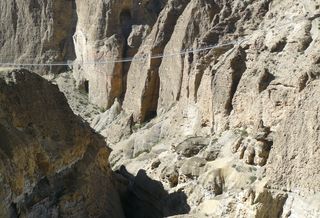 Arriving at last in Ghiling, an hour past our original destination, we admire the monastery and hear that the monks are celebrating Buddha’s birthday. We head up.

In the main room of the temple, six or seven monks sit in two facing rows perhaps eight feet apart. A long thin table stands before each row of monks. Some of the monks are young boys of perhaps twelve;
others are mature men. One of the younger monks is reading a bit hesitantly from a piece of paper that has been folded so often it is coming apart in his hands. When he finishes, all the monks begin chanting. A worshipper makes the rounds, bowing to each monk and putting a few bills on a light scarf resting in front of the monk. The monk folds the scarf over the money and resumes chanting, throwing what look like small seeds in the air and ringing a bell at frequent intervals. The chanting reaches a climax with a sudden burst of drumming and horn playing – loud and dissonant to my ears. Then the chanting resumes. 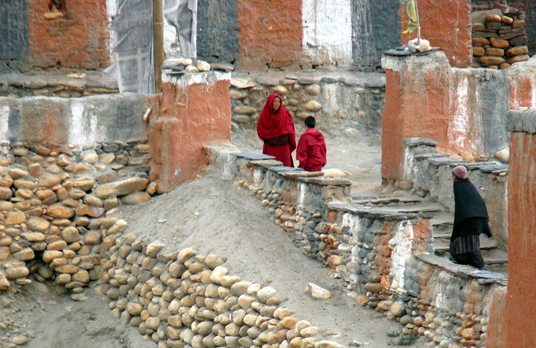 A monk gives me a flashlight so I can see the pictures on each wall. They seem a weird mix of Buddhist and Hindu representations, very bright and well-executed. And well-preserved, if the inscription – 1797 – can be relied upon.

Tonight’s lodging is the most basic yet and the weather is colder, but we have beds and warm blankets. The toilet, however, does not bear further description.

Posted at 01:53 PM in Misadventures in the bush | Permalink

Looks like a fantastic experience. Did you need/have time to condition to trek at that altitude?

For sure I could have used more time conditioning. But the altitude was bearable.