We are leaving the last of Tibet behind today, descending from Chelle to the floor of the Kali Gandaki. To extract the maximum up-country time from our territory permit, we’ve left ourselves a single day to get to Kagbeni from Chelle – a hike that took two days on the way in.

It is a demanding day, in part because our guide wants to get as much hiking in before noon, when the winds will surely be raging up the river valley. So we plough on with only a couple of occasional five-minute stops at the top of steep climbs. The good news is that I can feel the altitude change. My legs get as tired as ever, but the sense that every step requires a special breathing rhythm is gone. Even on the steepest uphills, running out of breath is rare. Other symptoms, such as a hacking cough, also recede as we drop below 3000 meters for the first time in a week.

The Kali Gandaki remains as remarkable as ever. The valley floor is so flat and barren that it looks almost like a reservoir of stones -- as though a dam had been constructed downstream and the gravel and rocks had somehow floated to the top. This is more or less what environmentalists tell us will eventually happen to Lake Powell and other big hydropower lakes; they’ll fill with debris. I’m sure that they’re right to tell us how terrible that will be, but if the floor of the Kali Gandaki is any guide, it will also produce some dramatic landscapes. 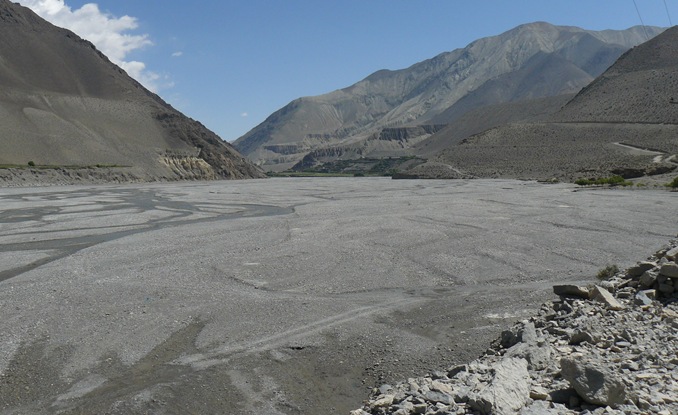 Toward the end of the day, we drop to the floor of the Kali Gandaki. It is not as flat as it looks from a distance. Rocks slip under our feet with each step, and old channels, now dry, make the footing unpredictable. Worse, the bridge we used to cross the river has washed away. We have a choice – wade or climb back to the road running high along the valley wall,

By now, I’m damned if we’ll climb these cliffs one more time. The water is swift but not deep, perhaps a bit above our knees. With poles, that’s usually safe, though pushing things if the current is very strong.

The standard Western stream crossing technique is to take your socks off, put your shoes back on, cross the river, pour out the water, put on the socks, and walk in damp but not squelching-wet footgear for a few hours. Wearing shoes helps a bit with the shocking cold of mountain streams and a lot with the treacherous footing of the streambed. Braced against the stream with a strongly planted upstream pole and an insurance pole downstream, this technique has gotten us across some tough streams, including a memorable encounter with the Upper Yellowstone in thigh-high flood.

But the Nepali guides have a different idea. They want to cross barefoot. So we too tie our shoelaces together, drape them around our necks and start across barefoot. I can feel the rocks underfoot – a mixed blessing, but good for stability. What I haven’t counted on is the way being barefoot changes the enthusiasm with which you drive your upstream pole into the river, knowing that the current will inevitably drag the point back downstream a foot or more before it hits the gravel. At least you hope it hits gravel.

When we get to Kagbeni, feet unpunctured, the Tiji festival boom is over. No one in the inn is going to Lo Manthang. Kagbeni is also on the month-long Annapurna Circuit trail, and the inn is full of guests doing some portion of tha trek. There’s a large group of mature Japanese women and men, plus a gaggle of 20-something backpackers – Germans and Russians, mainly – who’ve hooked up by chance during their last few days of the Annapurna circuit. They spend much of the evening arguing about whether to walk or take the bus next day to Jomsom, and how far to go beyond Jomsom. They finally agree to walk to Jomsom, starting at 6 a.m. One Russian boisterously puts forward first one proposal then another. He seems oblivious to the group dynamic. Sooner or later, someone needs to tell him to stop throwing out disruptive new options and to get with the program. If this is what the Russian Duma is like, I think, it’s easy to see why so many Russians voted for Putin.

This gaggle of Europeans seems as isolated from Nepal as any packaged-tour group staying at the local Hilton. A tour group may remember Kathmandu as the place with the terrible breakfast buffet, while the Europeans remember it as the place where they met a bombshell German babe, but either way, the trip is more about them than about Nepal. Maybe that’s true for all of us.

What I find interesting is that this group isn’t full of gap-year college kids. These trekkers have finished school. Many have dropped out of professional-track jobs. Some expect to pick up a new job in a few months, others lost jobs in the 2008-09 recession and are waiting for better times. But Nepal isn’t that cheap. Just to eat, sleep and indulge in the occasional beer or a bus, those backpackers must be spending $10 a day, plus airfare in the thousands of dollars. I’m not sure how many college students in the West can get their parents to underwrite the cost of a month on the Annapurna Circuit, so the trek is left to a slightly more affluent crowd. I suppose it’s no surprise that even backpacking has gone upscale as global economies converge.

Next morning, the Euro gaggle ends up leaving a little before we do, around 7. They move, like a convoy, at the speed of the slowest ship. We pass them in the first hour and soon are able to drop our packs at the Jomsom airport hotel and keep going. We’ve decided to take a day trip down the valley to a town called Marpha, also on the Annapurna circuit. 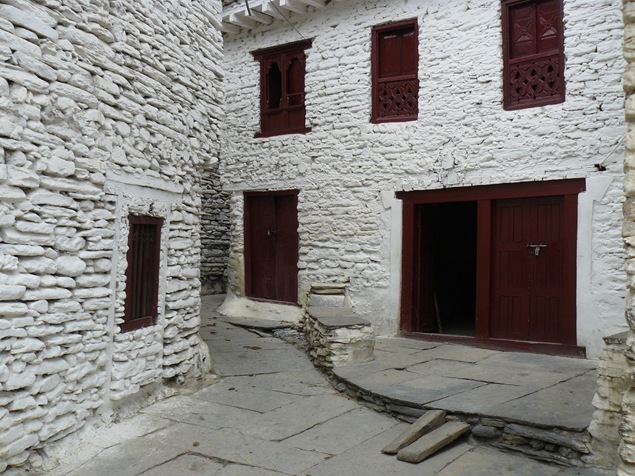 Marpha is a big change from the country we’ve been trekking through. On the way, we pass the first bit of greenery we’ve seen all trip that isn’t walled up like Ft. Knox. It’s a simple, close cropped patch of lawn that no doubt serves a pasture for the occasional horse, but unlike Mustang, the landowners aren’t consumed by fear that someone else’s goat might sneak an illicit bite. Indeed, even the walls around gardens here are lower, more symbolic and casual than in Mustang; water is clearly more abundant here.

Marpha itself is a lovely town full of white-washed stone homes with dark red frames around doors and windows. Marpha is proud of its apples, and it should be. We have an apple pie for lunch – a cinnamon flavored core of chopped apple surrounded by a flaky, deep-fried crust. I buy some yak cheese to go with it, despite anxiety about eating uncooked food. But we’ve spent the trip worrying about how to sterilize anything that passes our lips, and so far we’ve been fine. Maybe the economic convergence that makes backpacking more expensive is also slowly reducing the risk of bad water even in countries as poor as Nepal.

We head back along the road. It is a taste of what Mustang trekkers will soon experience. We can go twenty minutes with no traffic, but we can never ignore the risk that a truck or bus will come barreling around a turn. They take up so much of the road that you always have to have to be ready to jump for the side of the road if a horn sounds behind you. Even the motorcycles expect you to move if you’re in the same rut they’ve chosen. The Annapurna circuit is quickly replacing trail with dirt road, and I mentally cross it off our list of likely future hikes.

We end our hike at the airport hotel. It’s not fancy, but it does let us take our first hot shower in ten days. What a heavenly way to end our trek.

Posted at 08:40 PM in Misadventures in the bush | Permalink