« Our Cyberwar Strategy: Play for the Tie? | Main | Trekking in Mustang, Part 2 »

Stories from a recent trek through Mustang, Nepal:

It’s time for our audience with the raja.

I mean it literally. The raja and his remnant kingdom are tucked high in the Himalayas between Tibet and Nepal at an altitude of 12,000 feet and more. And with the shadows growing long, I am cold.

So, protocol can go hang. What I want to know is whether there are any more clothes I can put on before we meet the Raja of Lo. I'm wearing a watch cap, a rain jacket, cargo pants, and long underwear.  Not enough.  After walking four days to get to Lo Manthang, the kingdom's ancient capital, we’ve already got on all the clean clothes we brought with us. And most of the dirty ones.

I feel a little guilty. I spent nearly four years representing the United States in meetings with foreign officials -- meetings where it was a major faux pas to wear the wrong lapel pin. The kingdom of Lo has can trace its roots to 1380; it has had a king about three times as long as the United States has had a president. And I am going to sit down with its king wearing dusty hiking shoes and a watch cap.

I am pretty sure our protocol officer wouldn’t have approved.

Our guide entered the room. “Quickly please!” he said. “The raja will see you now.” I rise to my feet and head down to the street, stopping only to tuck a small bottle of local whiskey into my pocket.

The bus from Kathmandu to Pokhara bumps and squeals down the steep, winding grade. The high-pitched squeal of brakes is an annoyance, except when the road pitches down and we can see, too easily, over the road’s edge. Then, the wail of the brakes has a kind of comfort in it.

We are leaving behind the press and clamor of Kathmandu. Out on narrow terraces eked from steep hillsides, we see farmers harvesting corn, cutting down everything and carrying out bundles of corn stalks on their backs.

Hours later we arrive in Pokhara – a bustling little south Asian town at Annapurna’s feet. The next day, we are up early for the short flight around Annapurna to Jomsom.

We arrive at 5:30 for a 6 am flight. At 6, nothing has happened. We're on Nepal time now. When it finally takes off a couple of hours later, the flight rises over some steep hills, turns right at the giant peak, then cruises up a steep valley, with mountains rising above us on both sides.

The plane doesn’t exactly descend to land in Jomsom. We just keep flying at more or less the same altitude until the airfield rises to meet us.

Jomsom was until recently the jumping off point for most treks into the ancient kingdom of Lo. The kingdom and the territory around it are now known as Mustang, and Mustang has long been restricted territory. Foreigners were barred until the 1990s, and even now a permit (and a hefty fee) is required to trek in Mustang. Jomsom is the administrative and governm

ental capital of the region.

Nepal’s officials check our permits for the Mustang restricted area. They also tell us to change our plans. Our entire trek was planned around a festival in Lo Manthang – a religious ceremony featuring indigenous music, dancing, masks and costumes. But it turns out to be a moveable feast, and the event has been moved back a couple of weeks. We can't postpone our trek at this point. We'll have to miss the festival. It’s like this morning’s flight, I think. If you’re on a timetable, you’re bound to be disappointed in Nepal. Rolling with the flow is the only path to contentment. And, on trips like this, nominal goals like the festival are in the end a kind of maguffin – the term Alfred Hitchcock used for the otherwise meaningless object that drives the plot. 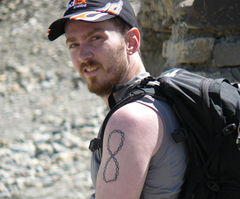 Besides, we've got another maguffin. Three of them, actually. We’re carrying books and toys for three of Mustang’s schools. This is almost a tradition for us; when we hiked the Inca Trail to Machu Picchu in Peru, we brought a bunch of our kids' outgrown toys and helped a local group distribute them at a mountain schoolhouse. This time, I've gotten advice about local schools from the Alex Lowe Charitable Foundation. Our kids are grown, and their kids are too young to have castoff toys, so I've solicited contributions from friends and colleagues, who have loaded us up with 25 pounds of books and toys. We need to find the schools and drop off three loads as we work our way up the valley to Lo Manthang. Our first dropoff is in Kagbeni, at the end of today's hike.

Mustang is in the rainshadow of the Himalayas, with annual rainfall roughly equivalent to the Great Plains of North America. The mountain slopes are steep and arid but they do not drop into a V-shaped valley. Instead they stop abruptly at a wide flat expanse of gravel with a thin braided river – the Kali Gandaki – wandering among the rocks. The original valley floor must have filled with centuries of glacial runoff. Perhaps someday this will be a pastoral scene, with a river ambling back and forth through grassy meadows. But for now the valley holds nothing but softball-sized rocks from edge to edge. In this whole expanse, there is one tree and no grass. The valley must be filled with raging snowmelt each spring, stripping away any plants that have gained a foothold since the last flood. 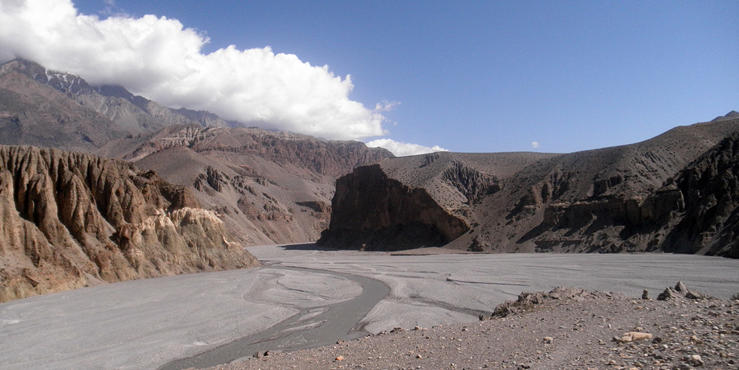 Working up the valley, we cross the braided river a couple of times on wooden bridges cobbled together from random debris. Then our path rises to a new road clinging to the right side of the valley, just above the river bed. We start out at a brisk pace, but even with porters to carry much of the load, I’m soon sweating and lagging, losing ground whenever I stop to take a photo. It’s a short day, with little altitude gain, but we’re already at 2800 meters and not in hiking shape. I'm glad when, after an hour and a half of hiking, we come to a small village with a teahouse. We order sweet milky tea and rest. Refreshed, another half an hour of walking brings us to Kagbeni. The lodge has a great glassed-in dining room overlooking the largest green patch for ten miles around – 4 acres of oats and barley that dip and wave in the constant wind like the sea. It’s mesmerizing.

Liesl Clark of the Foundation has told me to look up Kunga Tashi, who leads the School Board and runs the “Dancing Yak” Restaurant. Kunga turns out to be a strikingly young man with a passion for the school. He tells me that it has recently expanded and now takes boarders as young as four and as old as sixteen. Especially in the higher grades, almost all the kids who want an education must become boarders. There are only about six or seven schools beyond tenth grade, and they have to serve a nearly roadless region the size of West Virginia. 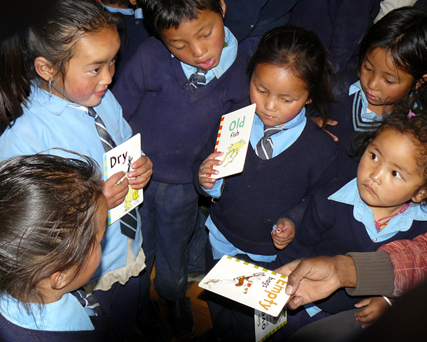 Thanks to foreign and Nepalese government assistance, the school charges nothing for tuition, room or board. The Foundation's contribution is an extremely well stocked library to which we'll be adding toys and some books and maps. The smallest kids are on break, and they come in to road-test the toys. The most immediate hit is a set of two blocks with half of a vehicle pictured on each face. If kids successfully pair the front and back end of the vehicle – a fire engine, say, or a motorcycle – they are rewarded with a sound that matches the vehicle.

I know just enough Nepali to communicate this concept to a gaggle of four-year olds. “G
ood?” “No good?” I ask, pairing the fire engine with the motorcycle. “No good,” they shout. When I finally get it right, with their help, they are startled with delight at the fire engine's loud siren. Then each kid gets a chance to match a different vehicle and discover the sounds of success.

I am determined to get some play value from this toy because I had my doubts about bringing wooden toys, which are almost as heavy as they are politically correct. In the end, though, the weight was worth

it. And the kids’ enthusiasm for the other toys – tinker toys, jigsaw puzzles, and a set of Dr. Seuss flash cards – made it feel like Christmas.

We get a tour of the school and plenty of tea. They have no computers for the kids. A Danish group had sent one a couple of years ago, but the mouse doesn’t work. At the suggestion of Liesl Clark, we've also collected laptops from friends and colleagues. These we've left with the Open Learning Exchange in Kathmandu, where they'll be refitted with Linux and some Nepali and English learning programs. Liesl asked that we not take the laptops themselves to the schools because the students and faculty will need training before the computers are actually used. Considering their weight, we're happy to oblige. In any event, the school doesn't now have table space or a free room to put computers in.

It’s building more, though. The young men at work on the new building clearly understand twenty-first century global fashion. They wear low-slung, gravity-defying pants and a variety of branded shirts. As an apparent concession to Kagbeni's constant wind, they have covered their faces, often with kerchiefs that make them look like train robbers or wannabe-anarchist WTO protesters. But their work methods are closer to the ninth century. To move a large pile of rocks fifteen feet, they form two lines and toss stones rhythmically from one worker to the next, bucket brigade style.

Signs of religious devotion are everywhere in Kagbeni. It is an ancient monastery town -- though it looks more like a fortress. And perhaps it was. Fortresses are established to protect valuable assets, and the most precious resource in this dry and vertical land is probably the 4 acres of fla 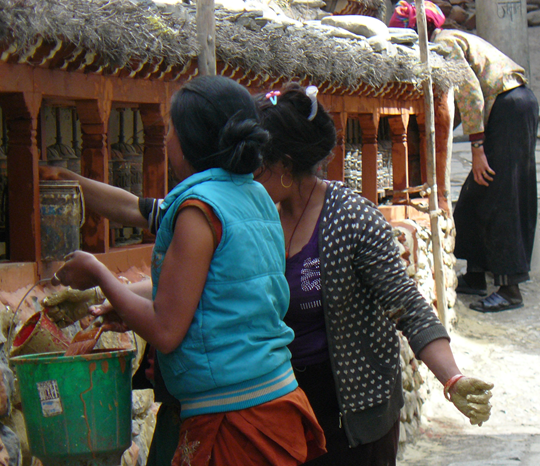 t and irrigated barley just outside our hostel. The Buddhist monastery here dates to the 1400’s and was once maintained by hundreds of monks who farmed land up and down the valley but could retreat to defend the fortified town in a time of war. Now, though, the monastery's population has dwindled to 40 – half of them students – plus a couple of remarkably large and mean guard dogs, who bark fiercely down from a rooftop that isn’t quite far enough above our heads.

The main worship room of the monastery shows telltale signs of the monastery's declining fortunes; much like an over-stretched British peer’s stately home, it mixes impressive art and history with cracked windows and tawdry modernizing touches, like the twisty fluorescent bulb that hangs down in front of a centuries-old statue of Buddha.

Posted at 08:53 PM in Misadventures in the bush | Permalink

the picasa link for the pictures isn't working.

Should be fixed now. Thanks.