Words you can't say at the Pentagon

The Ft. Hood shooting has finally been the subject of a careful after-action analysis -- a study that DOD should have done but didn't.  The analysis was done instead in a bipartisan report by Senators Lieberman and Collins, who lead the Homeland Security committee.  Their report reveals few new facts but offers disturbing insights into DOD’s cultural dysfunctions. 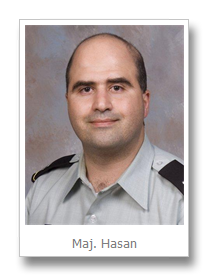 On November 5, 2009, witnesses say, Maj. Nidal Hasan leaped on a desk at a Ft. Hood readiness center, shouted “Allahu Akbar” and began executing the unarmed soldiers all around him.  Thirteen people were dead and thirty-two wounded before an armed police officer managed to shoot Hasan five times.  Now confined to a wheelchair, Hasan is expected to go on trial shortly.

Anyone who paid attention to news coverage after the rampage knows that the Army had plenty of warning about Hasan’s Islamist views.  Classmates say that he questioned whether he could fight against other Muslims and made presentations justifying the murder of non-Muslims, suggesting that Muslim-Americans in the armed forces might kill other servicemembers, defending Osama bin Laden, and justifying suicide bombers.  The servicemembers in the audience were so appalled that the instructor finally stopped one of Hasan's presentations.  Off the record, it seems, everyone thought Hasan was dangerous, a nutjob, or an Islamist, and perhaps all three.

On the record, though, no one would criticize him.  You don’t rise in the armed forces if you can’t read your superiors.  And the rising officers who met Hasan knew what their superiors wanted without having to be told.  Islam was a religion of peace, and Muslims in the Army were a welcome sign of diversity. Treating Hasan as a dangerous Islamist would put those messages at risk. 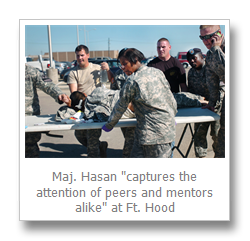 And that might be bad for their careers.  So instead they spun Hasan’s rants into gold.  His 2007-2008 evaluation praises Hasan for having "focused his efforts on illuminating the  role of  culture and  Islamic faith  within the Global War on Terrorism."  It adds that his "work in this area has extraordinary potential to inform national  policy and military strategy. … His unique interests have captured the interest and attention of  peers and mentors alike.”

The next year was the same, full of praise for Hasan’s “keen interest in  Islamic culture and  faith  and his shown capacity to contribute to our psychological understanding of  Islamic  nationalism and how it  may relate to events of  national security and Army interest.”

So far, no surprises.  It was clear within a few days of the shootings that political correctness had played a role in Hasan’s promotion and retention.  What the Lieberman-Collins report tells us, though, is how big a role political correctness played even after the government discovered through intercepts that Hasan was corresponding with the Yemeni-American Islamist, Anwar al-Awlaki.  (Awlaki’s name is redacted from the report but has been widely reported in the press.)

The intercepted correspondence went to the FBI’s San Diego office. According to the Lieberman-Collins report, Hasan’s initial correspondence wasn’t conclusive proof that he was a risk, but it begged for investigation.  His messages, it says, “meandered in  a ‘stream of consciousness,’ hinted at the answer Hasan  wanted to hear, and  had content that contravened officership standards."  According to the report, "The communications on their face  raised questions of  whether Hasan was a potential counterinteligence or  counterterrorism threat.”  That’s how the FBI office in San Diego saw it too. Because Hasan was stationed at Walter Reed medical center, San Diego asked the FBI's Washington field office to follow up.

The Washington field office booted the assignment.  It waited until the 90-day deadline for responding to inquiries was nearly up.  Then a detailee spent four hours looking at Hasan’s records.  The detailee found no mention of Hasan in terrorism databases but he did find the evaluation reports in which Hasan’s public displays of radicalization were cleverly repackaged as praiseworthy research into the “role of culture and Islamic faith within the Global War on Terrorism.”

So, put yourself in the place of the agent assigned to this problem.  You’ve got an Army major sending weird but not quite damning emails to al-Awlaki.  The Army seems to know he’s working in the area of Islam and terrorism, and he isn’t in the suspected terrorist database.  You could go talk to him, or send an official request for information to the Army.  If you do, though, there’s a chance you’ll be accused of trying to wreck Hasan’s career on flimsy evidence -- on the basis of his protected religious and political speech, no less.  In addition to constitutional violations, you could be slammed for racism, or Islamophobia, or cultural insensitivity. After all, this is happening in May of 2009, and the Justice Department is under new management, management that is sending very different signals about its priorities in dealing with terrorism and Islam.

Meanwhile, the evaluation reports are staring you in the face.  They offer an easy way out of the dilemma.  “Research, yeah, that’s the ticket,” I imagine the agent saying to himself, “Hasan could be doing research.”  So he blows off San Diego’s concern without interviewing Hasan or doing anything else that might cause waves.   San Diego complains. Washington fires back. And neither office does enough followup to discover the rest of Hasan’s correspondence with Awlaki.  (There’s a long and interesting inside-baseball story about that, and the FBI’s relationship with other agencies, in the report that I may discuss in another post.)

Next thing the FBI in San Diego knows, there are thirteen dead and 32 wounded at Ft. Hood.  As the reports hit the wire, one San Diego agent points and says to another, ""You know who that is?  That' s  our boy!"

You’d think a loss like that would cure DOD of political correctness.  You’d be wrong.

DOD quickly stood up an independent review of the Ft. Hood shooting by former Secretary of Veterans Affairs Togo West and retired admiral Vern Clark.  A staff of full-time contractors and military personnel served West and Clark, who were asked to look hard at internal threats to the military. The result of all this effort is a model of politically correct mush -- a classic of contractor-speak, in fact.

Fifty members of the military community were gunned down, their ears still ringing with “Allahu Akbar!” shouted by a man wearing their own uniform. And the official DOD report on the attack never mentions Islam once.  In contrast, it touches on the threat posed by “low self-esteem” four times.

The closest the report comes to blaming Islamic extremism for the attack is a single sentence identifying the sources of domestic terrorism.  In case you're wondering, they include “animal rights, environmentalism, nationalism, white supremacy, religious causes, and right-wing politics.”

So there you are.  I can’t help wondering if Secretary West and Adm. Clark expect the Pentagon to take on the threats in that order. That way, DOD would first stem the threat of excessive nationalism in the military; then it could turn to the threat posed by “religious causes.”  And maybe, just to avoid discrimination, it could do the religions alphabetically -- getting to Islamic extremism after it mops up Episcopalian extremism and just before tackling Jehovah's Witness extremism.

Okay, that’s a little unfair to Secretary West and Adm. Clark.  But only a little.  In its delicate sidestepping of Hasan’s obvious motivation, and its irresponsible sidestepping of the shocking PCness epitomized by Hasan’s evaluations, the West/Clark report is part of DOD’s problem.  It stands in stark contrast to the aggressive DOD action in 1996, when two Army soldiers carried out a racially motivated murder of an African-American couple.  Then, the Army had no trouble adopting a policy on extremist activities that forthrightly named white supremacist activities as a basis for disciplining soldiers.

When it comes to jihad, though, the mealy-mouthed West/Clark report tells us everything we need to know about DOD’s thinking. As the Lieberman-Collins report makes clear, the Army had all the tools it needed to deal with Hasan’s radicalization; it had used them recently and to good effect against racist and white supremacist groups in the Army.  As the Lieberman/Collins report makes clear, however, Islamic supremacy is an ideology that DOD refuses to acknowledge:

That sounds like a safe bet to me.  But it’s a bet likely to be measured in deaths not dollars.

If there’s anything I’ve learned in government, it’s that intellectual climate matters.  The 9/11 attacks were aided greatly by an intellectual climate in which privacy and civil liberties had far more practical value than preventing terrorist attacks.  And a climate in which Islamic radicalization is described only in euphemisms didn’t just protect Hasan from scrutiny.  It will help the next recruit as well.

That’s why efforts to shut the Overton window on inquiries into domestic radicalization are not just wooly-minded.  They’re dangerous.  This time, political correctness runs the risk of getting Americans killed – by discouraging counterterrorism officials from doing their jobs properly.

Senators Lieberman and Collins deserve credit for their courage in holding the window open.