This is another excerpt from the book I'm writing on technology, terrorism, and my time at DHS, tentatively titled "Skating on Stilts."  (If you want to read the excerpts in a more coherent fashion, try the categories on the right labeled "Excerpts from the book." I'm afraid I can't fix the bug in TypePad that prevents me from putting them in the category in reverse-chronological order.)  Comments and factual quibbles are welcome, either in the comments section or by email:  fact.check.baker@gmail.com.  If you're dying to order the book, send mail to the same address.  I'm still looking for an agent and a publisher, so feel free to make recommendations on that score too.

cold drizzle is falling on the Pentagon parking lot. The 9/11 memorial is nearly empty. In nearly four years at the Department of Homeland Security, I’d never managed to get here. Now I’m out, with the rest of the Bush Administration. I have time to pay a quiet visit.

I don’t like the place. Flat and unadorned, it feels like an extension of the vast Pentagon parking lot. The trees are scrawny, and the grounds are a utilitarian expanse of gravel and rainslick paving stones. Past the sparse vegetation and a concrete wall, traffic hisses and thrums on a highway.

I think I know what the designers had in mind. They wanted everything understated and modern. There’s a bench and a lighted pool of water for each victim who died here. The benches and the paths trace the path that Flight 77 must have taken into the massive west wall of the Pentagon that looms nearby, gray in the rain. Each bench bears a victim’s name. The site is all about good taste and minimalism. Security is tight. The grounds look as though they’re swept clean each night to remove any trace of the day’s visitors, their litter, their mess, their grief.

But I’m not in the mood for good taste. The place feels cold and runic. Some benches arc toward the building; others arc away. Some of the pools have names in them; most don’t. The benches are arranged by year, from 1998 to 1930.

I’ve come for a memorial; instead I’ve found some kind of puzzle. 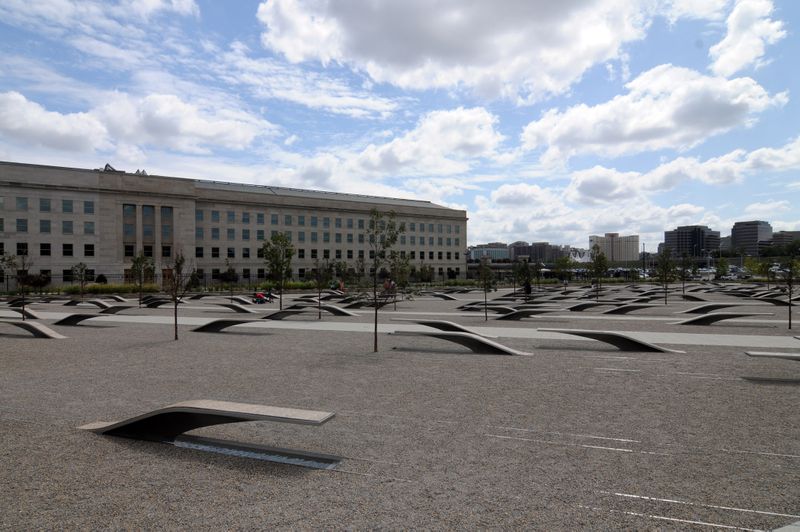 The visit was a long time coming. I practice law for a living, but I’ve spent years in government. This last tour has been a tough one. DHS is a startup, begun in the wake of disaster and assembled on the fly.

Government is never good at doing things the first time round. No one knows what job he’s supposed to do. Nothing is routine, and bureaucracies thrive on routine. Two years in, DHS suddenly realized that it needed a policy office, and I got the job. A startup within a startup, the office had to be built from scratch.

Everything was up for grabs – policies, procedures, authorities, personnel. I knew that wouldn’t last; slowly the demand for routine would crowd out innovation. So in the midst of chaos – uncertain budgets, borrowed staff, no backup – I felt the pressure to push new ideas and policies into place as quickly as possible. Early on, what mattered was how good your ideas were. Later, what would matter was whether your ideas had been vetted with every office that thought it had a stake in the decision.

So all at the same time, I’d had to build the office, recruit great people, solidify the budget, and put a solid policy structure under much of what DHS did.

Now I was tired. I needed time to clear my head.