Like Stewart, I'm mystified at the NYTimes article complaining about the failure to have a comprehensive exit program in place.  It seems typical of Congress --  if you don't like a particular program (say, interior enforcement) support some different program as "more effective."  It is always the "other" program or the "other" war or the "other" immigration expenditure that deserves support, not the one before us today.  But as Edward Alden says, the exit program isn't a good candidate -- the security justification for an exit system has yet to be made.

But what really seems unimaginable is that nobody has given the least thought to what a system like this would really cost.  And to work it would have to be installed at the land borders as well as the airports.  So, to take just one example, take a look at San Ysidro border crossing.  That's 27 lanes of traffic coming into the US and just 4 lanes outbound. 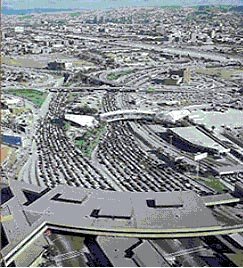 Take the left side of this picture and just double it to the right side, and that's what needs to be built -- and San Ysidro is just one of our hundreds of land border crossings.  The costs would be many billions of dollars -- and all for a program with marginal security benefit.  Color me skeptical.

I'm not sure if logistically a land borders exit is worthwhile.

But I do think finally getting a sister program to US Visit at airports, where CBP does the outtake on jetways-- the pilot that was just completed successfully-- is a great start for all those visitors from overseas that do not and would not likely use land borders for exit.

Would the data be comprehensive? No, but like E-Verify, or any other program that starts with a more confined population and works its way to expansion, starting at airports would be a great start. At least we'd have verification in some instances of exit and have the added advantage of nabbing or tracking some bad guys who might think they otherwise have not been on the US radar before they leave the US and we have to do an international manhunt to find them.

However, the Smadi case to me is a flag-waver for 287g. If that local cop had simply had access to an immigration database at his fingertips, he wouldn't have had to rely on anything but the data in front of him to show that Smadi's length of stay was up. Overstay, right there, end of discussion. Now if ICE doesn't show up and the FBI doesn't care, then that is a whole different story. But at least the local cop would be empowered to make a decision with his department to hold Smadi without having to rely on the feds, who may be more interested in covering themselves for a failure to show up.

I think they otherwise have not been on the US radar before they leave the US and we have to do an international manhunt to find them.Thank for the information.